Okay, don’t ask me how I came across this article, but it was posted on John Piper’s website and the title was too delicious for me to not dive into it:

”Why Is Christian Unity So Hard?”

Could it possibly be that Piper and his Calvinist fellow-travelers were actually going to try to make a serious attempt at reaching across the doctrinal barriers that, to be honest, they have mostly erected, in order to try to make common cause with other Christians that don’t think like them? Yeah, that idea lasted about two sentences:

“And for the most part, I’m not talking about disunity fueled by higher-level disagreements over primary Christian doctrines (ones that define the bounds of Christianity) or even secondary doctrines (ones that define, say, the bounds of a denomination). I’m talking about the far more common kind of disunity fueled by the endless variety of conflicts that break apart relationships, and even whole churches, because earnest, sincere Christians fail to humbly, gently, patiently “bear with one another in love” and cease being “eager to maintain the unity of the Spirit in the bond of peace” (Ephesians 4:1–3).”

Ah, got it. So it’s not disunity between parts of the church, it’s disunity in the One True Church that is Jon Bloom’s local congregation.

I will give him this, though. This paragraph was pretty good:

“What image did Jesus have in mind? We can see it in the previous verse: “A new commandment I give to you, that you love one another: just as I have loved you, you also are to love one another” (John 13:34). Jesus was about to “lay down his life for his friends” (John 15:13). And he told his friends (all of us) to love one another “just as I have loved you.” Jesus was envisioning a cruciform community of Christians whose sacrificial love for one another frequently required them to take “the form of a servant,” pick up their cross, and “count others more significant than themselves” (Philippians 2:3, 7).”

Maybe if he would try to apply it to people outside of his little Calvinist bubble, without setting forth doctrinal litmus tests, he might be on to something.

Postcards from Babylon, a documentary inspired by Brian Zahnd’s book of the same name, is available to watch on YouTube (for free) starting today.

This article on CNN about “imposter Christianity” is a good overview of the Christian Nationalist takeover of (re-emergence from within?) white evangelicalism. But it also leaves me feeling a bit uncomfortable. I feel like it lets American Christianity off too easily. See, we’re the real Christians, and they are just imposters. But if the majority of Christians throughout this country hold to views that are compatible with Christian Nationalism, maybe the modifier isn’t necessary. It’s just that Christianity is rotten to the core and needs a wholesale teardown.

Number of times in history the church has been able to resist the temptation to abuse its privileged position in empire: 0.

Most Christians are afraid of what will happen if our society becomes largely secular like Europe. But to be honest, I welcome it. A church without power may actually have a chance to follow Jesus again.

Also, read this thread by Rabbi Danya Ruttenberg about “not real Christians”.

These two Twitter posts came up next to each other on my timeline: 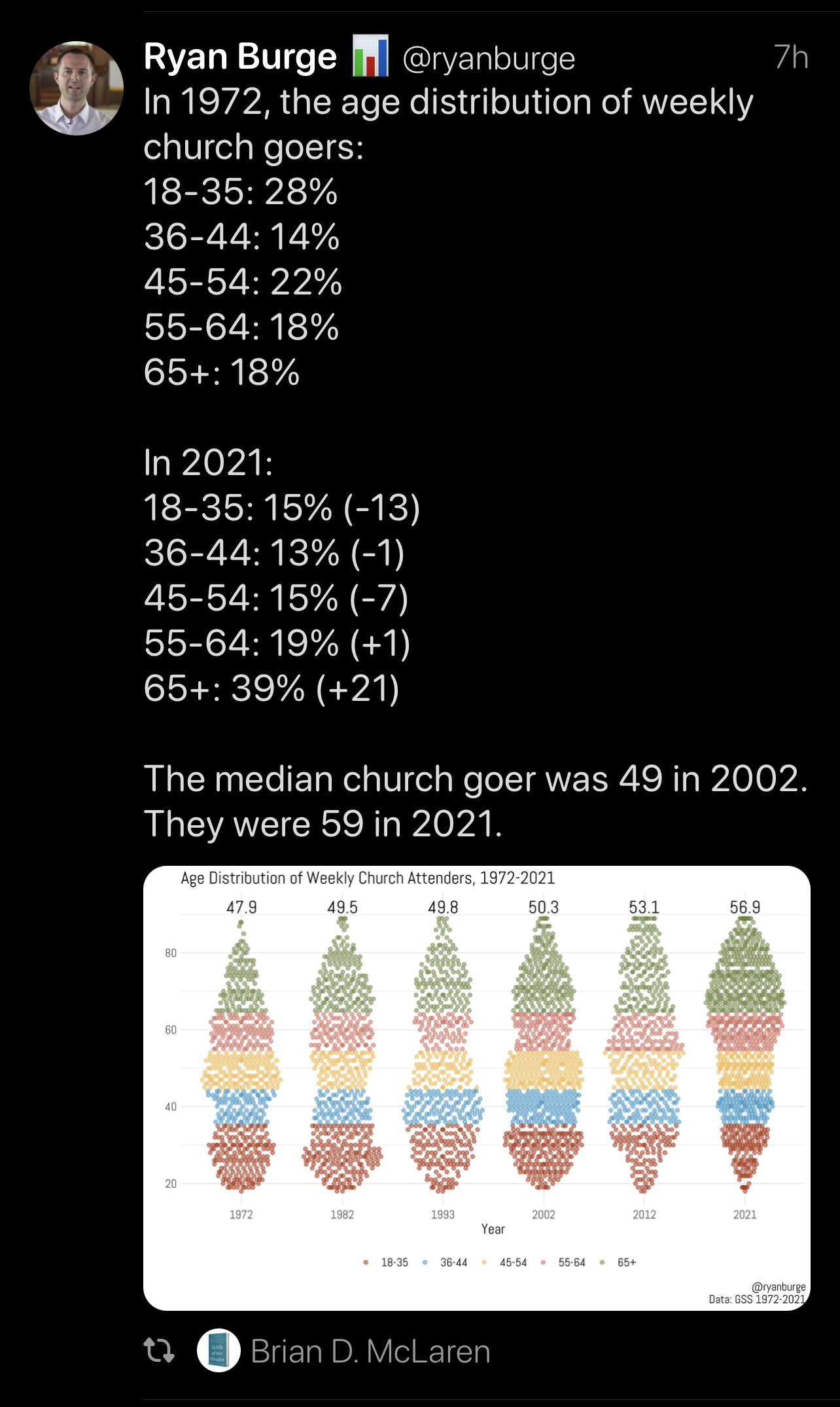 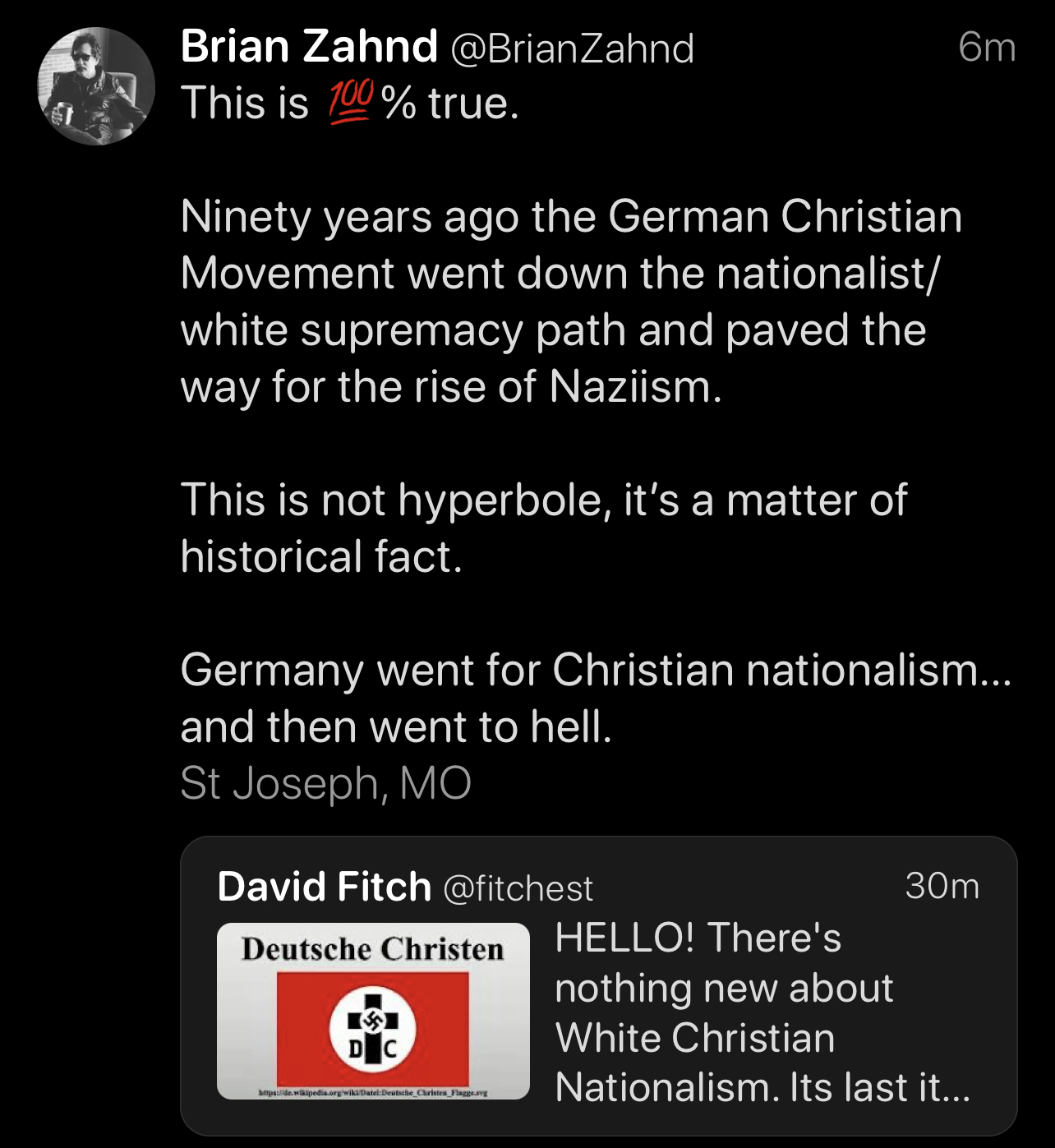 The second tweet from Brian Zahnd talks about the German Christian movement, which was a Christian Nationalist movement that pre-dated and in many ways ushered in Naziism.

Speaking of Christian Nationalists, here is one making a great case for atheism, or any religion other than Christianity. And yes, if I were Pope, I would excommunicate her and declare her views anathema for sure.

Twenty years ago, I figured that society would at least make some sort of effort to combat climate change to prevent the worst-case scenario. Ten years ago I figured that when the shit started to really hit the fan we would do something.. anything. Well, the shit is hitting the fan right now (and has been for the past few summers), and there is no evidence that human civilization has the capability to stop the worst outcomes. We can’t even get people to wear a mask in a pandemic.

So at this point, I figure the best I can do is try to encourage my kids to relocate closer to the poles so that my descendants may have a chance of not dying when most of human civilization collapses.

But hey, maybe voting for Republicans all those years will net save a couple hundred thousand fetuses a year from being aborted? I guess that’s worth losing a few billion people and all of modern human civilization by the time the climate finishes its warm-up, amirite?

In 2100, the last few thousand people in the last human settlement in the world in northern Canada will do their business at the Joe Manchin Memorial Pit Toilet.

Let’s check in with the Evangelical God:

The thread that I pulled that ultimately led to me deconstructing out of evangelicalism was inerrancy, and it’s truly on display in the modern evangelical GOP. When the entire Bible is considered inerrant and literal, despite the very clear fact that it is neither, it forces you to come up with some… novel ideas… in order to keep things together. It also forces you to ignore modern science, psychology, sociology, and even history in order to stick to a supposedly inerrant interpretation.

And it ignores the radical, ever-expanding love of Jesus.

From the Department of Cry Me a River

Poor Bart O’Kavanaugh, beer aficionado and red-faced cryer in the face of credible accusations by multiple women, had his privilege of eating dinner at Morton’s interrupted by protesters who were not too thrilled by his political pronouncements from the bench.

Morton’s, upset that they may have had to forego a little revenue because of the people’s exercise of their free speech rights, decided to turn into Kavanaugh’s spokes-puppet:

“Politics, regardless of your side or views, should not trample the freedom at play of the right to congregate and eat dinner,”

Cry me a fricken river, Morton’s and Justice President of the Keg City Keg Club. You had the minor inconvenience of having people chant in front of where your beloved SCOTUS Legislator was dining, meanwhile children can’t go to school and families can’t go to parades without risking their lives because of the policies of him and his fellow Judicial Activists. And don’t get me started about the fact that red states are starting to hunt pregnant women down like it’s the Hunger Games, also because of him.

Happy Independence Day. Meanwhile, a member of our “well-regulated” militia took it upon himself to shoot up a 4th of July parade, and state-sponsored terrorism continues unchecked.

But freedom, amirite? A few tens of thousands of unnecessary death is just the price of freedom. Except for in every single other free country in the world, where these types of mass shootings do not happen.

“The Christian is not merely ‘alone with the Alone’ in the Neoplatonic sense, but [is] One with all ‘brothers and sisters in Christ.’ The Christian’s inner self is, in fact, inseparable from Christ and hence it is in a mysterious and unique way inseparable from all the other ‘I’s’ who live in Christ, so that they all form one ‘Mystical Person,’ which is ‘Christ.’”

Western Christianity has largely misunderstood the concept of the Body of Christ, which has led to rampant individualism. Just look at the way Christians were at the forefront of the anti-mask and anti-vax communities at the height of the pandemic. If we fail to understand the mystic nature of our union with Christ that makes up Christ’s body, we fail to understand everything!

Until we understand that not only are we our sibling’s keeper, but in fact that we are one in our very nature with our sibling, we will continue to go down the paths of war, and greed, and injustice.

This article by Dante Stewart is a must read:

“I remember when I thought that another person’s freedom and choices—particularly those of women, LGBTQIA+ people, poor people, and immigrants—meant my oppression and that person’s erasure meant my victory. I remember what it was like to ingest the toxic air of religious bigotry—creating enemies of women—hearing the words “baby killer” come out of the same mouth as someone who says “hallelujah.” These cultural wars (really, wars), that protect hatred and disregard the bodies and well-being of our neighbors, depend on our distance from the marginalized. They use the Bible as a weapon of power rather than an instrument of love.”

If your god requires that 10-year old girls carry their father’s child to term then your god is evil and should not be followed.